CDH International is a registered charity in the US, UK, Netherlands, Hong Kong, Singapore, Canada and Switzerland. 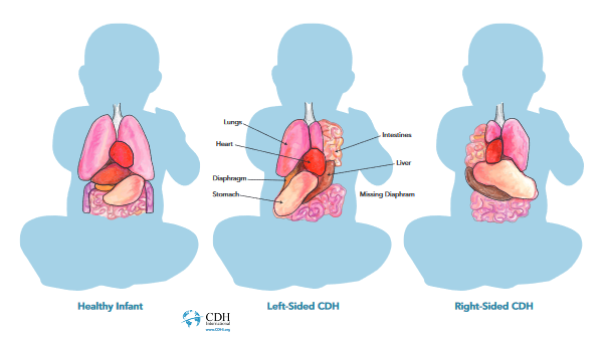 What is Congenital Diaphragmatic Hernia?

CDH stands for Congenital Diaphragmatic Hernia, which is a birth defect that occurs when a baby’s diaphragm (a thin sheet of muscle that separates the abdomen from the chest) fails to fully form, allowing abdominal organs to enter the chest cavity and prevent lung growth. CDH occurs in approximately 1 in 2500 births, with over 1600 babies diagnosed each year in the United States alone. There is currently no known cause, but studies have suggested that it is likely due to a number of genetic and environmental factors.

The diaphragm typically forms during the first eight weeks of pregnancy. In CDH patients, the size of the hole in the diaphragm will determine how much a baby’s lungs, heart, and other internal organs will be affected.

Approximately 40% of CDH cases are associated with other birth defects, most commonly of the heart. These are often difficult to diagnose and confirm until after the baby is born. A diagnosis of CDH also typically occurs alongside various degrees of lung hypoplasia and pulmonary hypertension.

The prognosis for babies diagnosed with CDH remains statistically at 50%. Unfortunately, there is no reliable indicator to predict the outlook of each case. Sometimes, babies with no diaphragm and very small lungs can fare very well, while sometimes babies with two full lungs may not survive. A measurement called head-to-lung ratio is sometimes used to determine whether to intervene prenatally through in-utero treatments, but it does not indicate a true survival rate. Lung function is also not a viable indicator since many other factors determine the health of CDH children, such as kidney function, brain function, other birth defects, and other possible complications. Every baby with CDH is different – like a snowflake, no two are alike.

There are two different types of CDH: left-sided and right-sided (Bochdalek), and bi-lateral (Morgagni). Left-sided CDH is by far the most common, and may affect the small and large bowel, stomach, spleen, and liver. Right-sided hernias typically only affect the large bowel and/or liver. Bi-lateral CDH affects both sides of the diaphragm and is quite uncommon (2%). 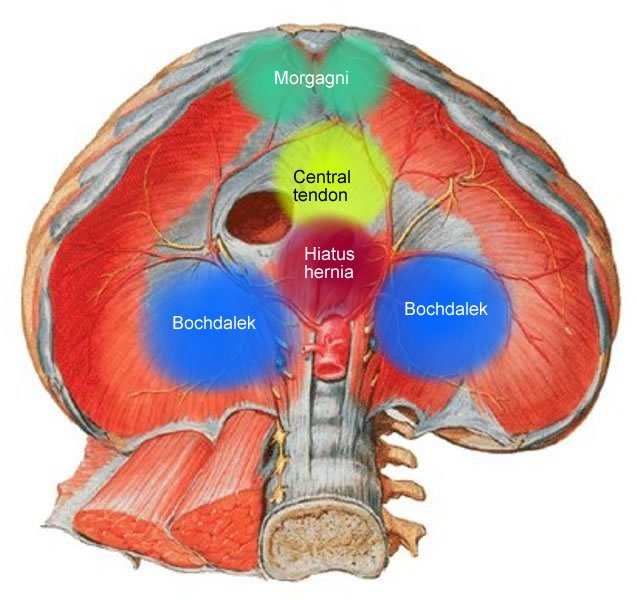 [/vc_column_text][/vc_column][/vc_row]
Translate »
Manage Cookie Consent
To provide the best experiences, we use technologies like cookies to store and/or access device information. Consenting to these technologies will allow us to process data such as browsing behavior or unique IDs on this site. Not consenting or withdrawing consent, may adversely affect certain features and functions.
Manage options Manage services Manage vendors Read more about these purposes
View preferences
{title} {title} {title}