CDH International is a registered charity in the US, UK, Netherlands, Hong Kong, Singapore, Canada and Switzerland.

Josh Hensley is the father of two CDH babies, both of whom grew their wings.  It is hard to put into words how important this person is to the charity. Back in October 2010, this individual sent CHERUBS an email interested in being a volunteer with CHERUBS. Having lost two children to CDH, this member wrote in this email that he felt immense responsibility to “wage war” on CDH. His wife and he wanted to set up a CDH awareness tree at the festival of trees for Primary Children’s Hospital that year and wanted CHERUBS to be a part of it. From there, the rest is history. Josh Hensley is currently the Research Director at CDHi and has held many volunteer positions at CHERUBS since late 2010. He has traveled the world raising awareness and continues to wage war against CDH and we know he will not quit until that war is won. He has been a voice of reason throughout the years, for we don’t get much Dad point of views on our volunteer team. He is a one of kind man, has a big heart and is out there in the trenches fighting to put an end to CDH. Josh and his wife Melanie are the proud parents of 4 girls. Today, we thank Josh for all he does for CDH International and CHERUBS, his passion in wanting to wage war on CDH and his desire to help all families that are affected by CDH.

Evie Nanette was born 06/14/2007 with a left-sided CDH at University of Utah hospital and transported to Primary Children’s Medical Center. The initial outlook was promising, but Evie’s oxygen levels started failing. Unfortunately Evie was not a candidate for ECMO because of a small brain hemmorhage. We said goodbye to Evie, our first child, a short 14 hours after she was born on 06/15/2007.

Allyson Belle was born 02/27/2009 at 33 weeks with a left-sided CDH at University of Utah hospital and transported to Primary Children’s Medical Center. Allyson did very well and had her diaphragm repaired 3 days after birth. While still in the NICU, she had to have a second repair. We finally got to take her home after 3 1/2 months. She was on a feeding tube and oxygen almost the entire time. In February 2010 Ally was back in the hospital for another repair. During surgery she had a pulmonary hypertensive crisis and spent a month in the PICU. In June 2010 Ally was discovered unconscious and not breathing in her crib. Her heart had stopped at some point and she suffered severe brain damage. She was taken off life support three days later, 06/11/2010.

Josh works in Law Enforcement and he and his wife Melanie have two other children, Gracie and Molly, and reside in St. George, Utah. 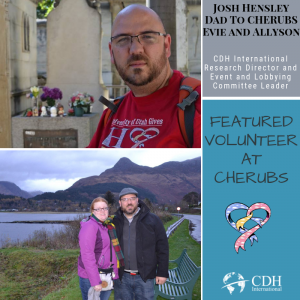 Translate »
Manage Cookie Consent
To provide the best experiences, we use technologies like cookies to store and/or access device information. Consenting to these technologies will allow us to process data such as browsing behavior or unique IDs on this site. Not consenting or withdrawing consent, may adversely affect certain features and functions.
Manage options Manage services Manage vendors Read more about these purposes
View preferences
{title} {title} {title}